The virtual reconstruction of an ancient musical instrument 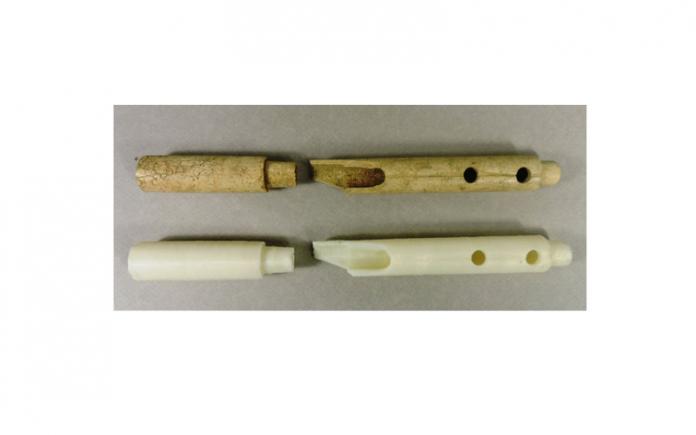 In the summer of 2012, the IFA–NYU Selinunte Mission began to explore the interior of the cella of Temple R. This excavation showed that the Classical and Archaic layers had been sealed by a deep fill of the Hellenistic period and left untouched by earlier archaeological research at the site. Among the discoveries was a series of votive depositions against the walls, dating back to the sixth century BCE. One of the most striking finds among the votive depositions was the discovery of two parts of a bone aulos, which can be dated to 570 BCE. The virtual reconstruction of the aulos found in Temple R at Selinus aims to study the acoustic and morphological attributes of the ancient musical instrument, but also to increase and improve the scientific investigation by overcoming the limitations caused by the instrument’s fragility. Digital technology allowed us to produce a 3D model of the aulos. This digital model has been translated into a three-dimensional artificial copy, using polymer as a material. Our goal is to reconstruct the aulos after analysing its organological characteristic and, if possible, discover its scale. We hope that this new study of the aulos will increase our knowledge of Ancient Greek music.

Excavation on the Akropolis of Selinunte (under the direction of Prof. Clemente Marconi)