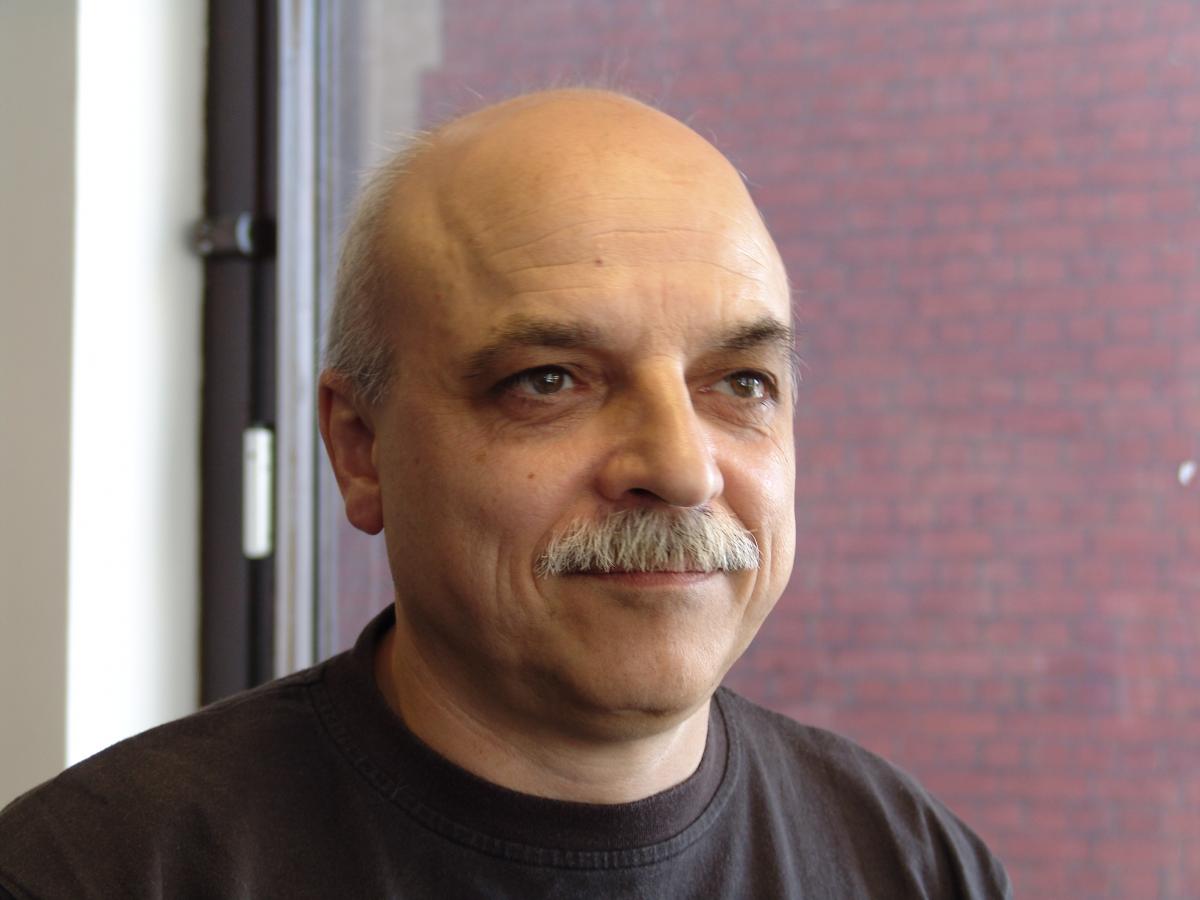 Gerhard was one of the good guys. Gentle, mischievously witty, and exceptionally learned, he espoused the values of openness, freedom, and collaboration. He was always willing to help, and many of us turned to him for technical advice over the years, both formally and informally. I had a video chat with him just two weeks before he passed away, and he was still very much himself, interested in future plans and projects, full of his usual goodwill and humour. Gerhard was one of those people who makes the world a better place, and it is truly difficult to grasp that he is no longer among us.
Gerhard was born on 25 August 1954 in Laufen, a small Bavarian town squatting right on the border with Austria, close to Salzburg. Gerhard went to school in nearby Freilassing, just fifteen minutes drive from downtown Salzburg over the Austrian border. Home included his father, a painter and decorator, his mother, a seamstress, his younger brother Manfred, and his grandparents. His first job, at just sixteen, was as an apprentice technician at a chemical laboratory in Burghausen, not far north of Laufen, where he lived during the week with his uncle, aunt, and cousin, in another happy family setting. But it became clear that laboratory life would not satisfy Gerhard intellectually, and between 1973 and 1977 he returned to higher education, gaining qualifications in sciences and in French and Italian. He enrolled at the Ludwig Maximilian University of Munich in the fall of 1977. There he completed the strenuous traditional German MA, at that time commonly an eight-year program, during which he studied German, French and Italian language and literature, linguistics and the history of science. During these years, Gerhard supported himself by driving a taxi, and later with work as a research associate to various professors at the university. His final MA thesis in 1988 - easily equivalent to a PhD anywhere else - was a dissertation written under Prof. Dietmar Peil entitled Die Alchimie in Georg Rollenhagens `Froschmeuseler'. Rollenhagen was the sixteenth-century author of a pseudo-Homeric metaphorical epic cast as a battle between Frogs and Mice. Living at a time of political and social instability, Rollenhagen promoted the virtues of cooperation and friendship, asserting that "only he who lives in peace can be at peace with God." This poem became hugely popular over the next three hundred years, being read by most middle-class Protestant children well into the nineteenth century. Rollenhagen's vision of social harmony and the importance of peace and friendship fitted well with Gerhard's personal convictions. Gerhard's focus on the alchemical content of Rollenhagen's work demonstrated how far he had already carried his hard-core scientific interests into the heart of his humanistic studies. Gerhard gained a Class 1 Magister qualification from the university.
In the middle of his MA work, in 1980, Gerhard spent a year abroad in the Auvergne, at what is today called Blaise Pascal University in Clermont-Ferrand, working on his French and gaining a Diplôme d'Études Universitaires Générales. But he gained much more than a diploma. In Clermont-Ferrand he met Gill. They fell in love, and remained together for the rest of his life, living first in Germany, and later in England.
One of the professors at Munich with whom Gerhard worked as an RA was Menso Folkerts, Professor of the History of Science at Munich from 1980-2008. Folkerts was especially interested in the history of mathematics and in the study of early European scientific manuscripts. Gerhard enthusiastically entered these fields himself, and they remained central to his interests throughout his professional career. By the 1990s, he was using TEX to typeset the publications of the Munich department, including critical editions of mathematical works. For these, he contacted the authors of a recently developed TEX package, John Lavagnino and myself, and so our long friendship began.
Gerhard used our package, "EDMAC" to produce many complex books and journals in the early 1990s. He typeset publications such as Robert of Chester's (?) Redaction of Euclid's Elements, the so-called Adelard II Version (Basel, Boston, Berlin, 1992), an edition of the letters of Nicolaus Copernicus (Berlin, 1994), Simon Bredon's Arithmetica, a Latin translation by Plato of Tivoli of an Arabic astrolabe text by `Ibn-aṣ-Ṣaffār (Munich, 1994), a Latin translation of part II of the Arabic Algebra by Abū Kāmil Shujā' b. Aslam (Amsterdam, 1993), the Latin Rithmachia of Werinher von Tegernsee (Munich, 1994), and other works. The themes included medieval mathematics and astronomy, and Gerhard was working in Latin, Old German and Arabic. Some of these publications included his own academic contributions, others were written by Menso Folkerts, Richard Lorch, Stefan Kirschner, Christoph Schöner, and other colleagues, and there were several collaborations. At this point, Gerhard was using his complete fluency in English, German, Italian and French, and had already acquired enough Arabic to be able to write about Islamic astrolabes.
Picking more or less at random, I cite a note that Gerhard wrote to me in 1995 that gives a flavour of some of his interests at that time:

I didn't time the two programs, I only saw their behaviour when they are called by MakeTeXPK, which in turn gets called by xdvi (Linux + teTeX). My impression was that ps2pk is a lot faster, but as I said, this is only an impression, I didn't do any serious timings.
By the way, a new volume of our Institute's publication series (Algorismus) has been published. It is a `Festschrift' with an article (an edition produced with EDMAC of an astrolabe treatise) by Richard Lorch, two other collegues and myself. I will send you a copy soon.

Gerhard was already deep into the innards of TEX utility programs, Linux, critical edition publishing and Arabic astrolabes. Between 1988 and 2001, Gerhard assumed technical responsibility for the International Catalogue of Mediaeval Scientific Manuscripts maintained jointly by Munich University and the Max Planck Institute in Berlin (http://jordanus.org), and the publication of the prestigious Algorismus series on the history of mathematics, the Complete works of Copernicus, and a database of the 7600 surviving letters written by the mathematician and physicist Carl Friderich Gauß. From 2001, he also began a technical association with the Wellcome Library in London, working on a system for capturing metadata on Arabic manuscripts, and producing output online and in print. This collaboration with the Wellcome Library was to continue in different forms until his death.
In 1996, Gerhard and Gill had moved to Tunbridge Wells in Kent, and initially Gerhard shuttled frequently between Germany and England. From 2001, things settled down a bit with several technical consultancies in England, and from 2004 he began to work full time at the Department of Digital Humanities at Kings College London, under Prof. Harold Short, first as an independent consultant (that gave him a freedom he enjoyed), and after 2006 as a Research Fellow, and then Senior Research Fellow. At Kings, Gerhard taught into the MA program in Digital Humanities, mentored, tutored, managed projects, consulted on technical matters, developed systems and collaborated in planning undergraduate programmes such as "The Introduction to the Design and Construction of Small Tools." He brought substantial external funding to Kings, including a funded project from Columbia University, New York, on Sanskrit manuscript metadata, that I had been involved in. Another consultancy on a Sanskrit project at Vienna University also enabled the two of us to work together for a while.
At Kings, Gerhard developed an interest in text mining, the computational analysis of large language corpora. This discipline enables one to discover invisible regularities, fingerprints if you like, that are buried deep within the language. A simplified form of this type of analysis is offered by Google's Ngram viewer. Gerhard analysed the deep structures in the speeches of US presidents, as they changed during their terms of office. A paper written collaboratively with Jose Miguel Vieira and to be published posthumously demonstrates the automated extraction of subject matter in nineteenth-century journals. Gerhard also applied these methods to the analysis of his favourite areas of medieval German alchemy, ancient Greek and Arabic manuscripts, and English texts from the nineteenth century to the present.
It was during his later Kings years that Gerhard began work on an ambitious project co-sponsored by the Wellcome Library that brought together many of his linguistic, historical and technical talents, and resulted in an extraordinarily innovative and exemplary resource that is today hosted at the Bibliotheca Alexandrina (the New Library of Alexandria) in Egypt. The Wellcome Arabic Manuscripts Online (WAMO) project (http://wamcp.bibalex.org) pioneered the standards-based approach to delivering manuscript images and metadata through a web platform, in a form that had never been applied to Asian manuscripts before. For anyone seriously involved in early Arabic studies, this is a game-changing project that is inspiring subsequent projects at Oxford and elsewhere. The project has many innovative features that only a practising historian would have thought to include, such as the ability to compare different manuscript leaves side-by-side in real time that make it a genuine academic contribution as well as a technical achievement.
Gerhard died unexpectedly after a short illness on February 8, 2012. After his death, the head of the Wellcome Library, Simon Chaplin, remembered him in the following words,

Over the past few years we had come to depend on Gerhard's extraordinary ability to turn our complicated and often contradictory ideas into achievable and elegant things that worked. ... his almost endless supply of patience and diplomacy [...] made him quite the most remarkably nice person to work with.

Everyone who had the privilege to know Gerhard knows this from personal experience. Gerhard was interested in a staggering range of intellectual fields, ranging from medieval German mathematics, Arabic manuscripts, and alchemy to Sanskrit, prosopography, computer programming, the analysis of linguistic corpora, and the construction of major web-based projects in the digital humanities. And for Gerhard, "being interested" meant knowing just about as much as anyone on the planet. But Gerhard wore his learning lightly, and what we all remember most are his extraordinary kindness, good humour and warmth.
- Dominik Wujastyk